Where is God in our 21st Century World?

A Thousand Bottles of Tears

“There is a sacredness in tears. They are not a mark of weakness but of power. They speak more eloquently than ten thousand tongues. They are the messengers of overwhelming grief, of deep contrition and of unspeakable love.” Washington Irving.

Inspired by the small vessels used in ancient times to collect tears as a mark of respect during mourning these hand-thrown individual ceramic bottles symbolise emotions of joy, love , sorrow and remembrance. Tear bottles date back to circa 1055 BC during the reign of David who made reference to collecting his tears in his prayers to God. Each pot is formed from a heart sized lump of clay, from the smallest baby to the largest adult.

Different clays and surface techniques such as burnishing, smoke-firing and melted glass with oxides, were used to emphasize the uniqueness of each bottle. Deborah is currently exploring ideas around themes of vulnerability that are found in the narrative of the tear bottles. At recent installations words written on paper by visitors have been placed in chosen bottles and re-kilned. The resulting ash and marks transform the pot leaving a tactile record of the words offered and enrich the whole of the artpiece.

One of the exciting opportunities that Deborah has been offered after winning the Chaiya Art award, is an invitation  along with several other UK and Norweigan artists to take part in an exhibition in China this year.   The exhibition ‘Matter Matters’ explores themes around the environment and its protection. Deborah will be exhibiting her piece ‘  Advent Greenhouse ‘ .

Here are a few thoughts from Deborah about what has happened since winning Chaiya Art Award.

“I have  been able to fund a studio space . I have worked from home since having a family so that I could juggle  with family commitments  and keep costs down but have been yearning for a separate work space away from home and looking for the past couple of years . Other  caring commitments and the wrong  timing meant  it just didn,t come together . But I am now able to rent a studio space at Ashburnham centre , with the gift of beautiful grounds to enjoy , potential for exploring the clay works that used to operate locally , and other artists around.
It was such a boost to my confidence to win – I still feel butterflies when I think about it – and that has fed into a strong focus to work hard, take risks, think bigger and use the confidence boost to keep growing and developing as an artist.  It was incredible timing as I hit 60 in the same year, but I now feel even more excited about art and want to work hard to make the most of the opportunities that seem to be presenting themselves.
I’ve also had several mentoring sessions over the last year,  which have been so helpful and I hope to keep that going.
Finally it’s an real privilege to have been invited to be on the judging panel for the next Chaiya award  and I’m already excited to see the work submitted.” 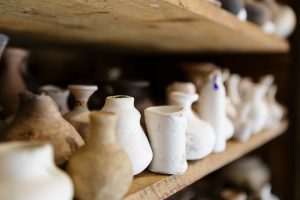 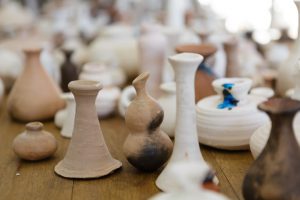 "Where the spirit does not work with the hand there is no art.”